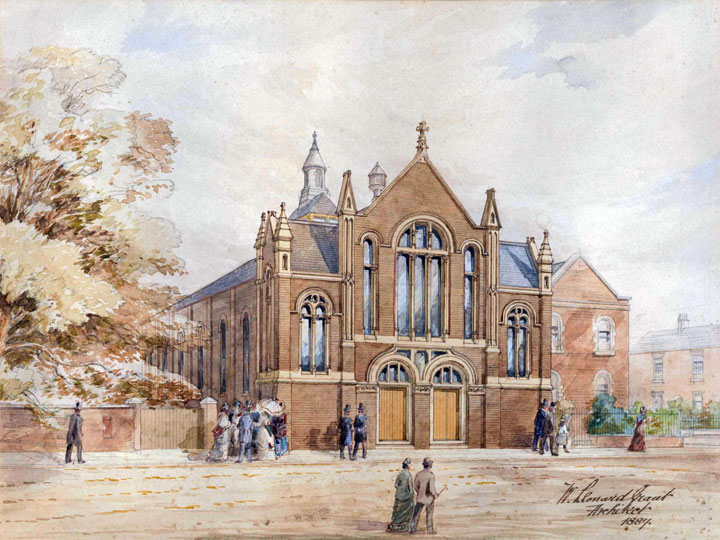 A New Church is Planted

It was on 4 September 1866 that Sittingbourne Baptist Church was born, when, in the presence of eleven witnesses, the thirteen founder members covenanted together in the house of George Hambrook Dean ( 1834-1924), who was its first deacon.

This house, “Whitehall”, Bell Road, Sittingbourne, now used as offices, still stands. After meeting for worship in the old Latimer Chapel, the Butts, and also in the Corn Exchange which later became the Town hall in the High Street (hiring charge £20 per annum), our present church site was purchased for £300 and a building erected for £1700. It’s memorial stone was laid on 13 May 1867 by Pastor Charles Haddon Spurgeon. 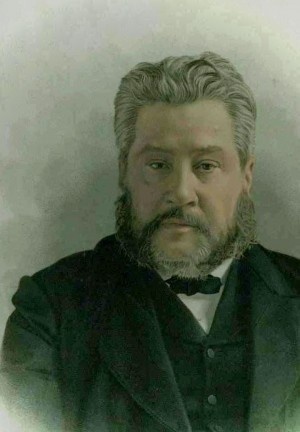 The first minister, a student from Spurgeon’s College, the Rev’d Robert Makin was pastor from 1868 to 1875 when he moved to Bideford, North Devon, where he died of typhoid fever in 1882 at the age of 42.Two short ministries followed, one of twelve months and the other of three years, when another student from the college, the Rev’d John Doubleday came in 1881 and exercised a ministry lasting 40 years.

Early in 1900, Mr Doubleday collapsed and subsequently suffered from “nerve storms of a very alarming nature”. This illness persisted for four years. During 1900 he was not able to work at all, and from 1901-1902 a student, Ernest Joseph Debnam, left Spurgeon’s College for a year to become Assistant Pastor. In 1903 a Deaconess, Sister Maud engaged in the pastoral work and during 1904 Doubleday resumed his duties. Through the kindness of the church in sustaining Mr Doubleday, his ministry was able to continue and membership numbers remained high, rising to their highest figure of 397 in 1908.

Under that long ministry, the church statistics reached their zenith in the first decade of the 20th century, and included amongst its members Messrs G H Dean, Daniel Wills and Henry Packham, who between them employed most of the available labour in Sittingbourne and Milton Regis.

The Church Gets a New Organ installed

In 1882 a two-manual organ by A H Browne of Deal was installed, and this organ is still in use today. Until 1884, the Sunday school met in the church at the south end of it, the small school room being divided from the main building by boards or shutters.

There was still a £600 debt on the original church building, when in November 1883 it was decided to build an extension at the rear of the church to provide on the ground floor an “Institute” or large schoolroom with cubicles for Sunday school classes above. This cost £700 and both debts, totalling £1300, were cleared by the time the Sunday school was opened on 6 March 1884.

By 1887, the congregations had outgrown the church building; people were sitting in the aisles and even on the pulpit steps. Accordingly, the church services were held in the Town Hall while the original 1867 building was enlarged. A new front wall was in what John Newman in Pevsner’s “The Buildings of England” (Penguin, 2nd edition, 1976) scathingly refers to as “a wretched round-arched style”, some eight feet in front of the previous one with its memorial stone. This and the internal work, which included galleries with circular windows above, staircases, a roof lantern, gas lighting, extra ventilation and the old pulpit, were all built within six months at a cost of £1240, and the building opened free of debt. The architect was William Leonard Grant, whose practice was in Sittingbourne High Street. In the mid 1890’s, the Sunday School had 800 scholars and to accommodate them, a further extension became necessary, so in 1896 the Manse on the west side of the church was demolished, and a new building erected abutting the whole length of the 1887 church. This contained classrooms and a Minister’s vestry and was opened 13 January 1897 free of debt, having cost £1,760.

The church has always maintained a close interest in the work of the Kent Baptist Association and its predecessor until 1976, the “Kent and Sussex”. A report in January 1897 states that “Sittingbourne Baptist Church has come to be one of the largest and most influential in Kent”. On five occasions the church has provided the Moderator for the Association; the Rev’d Robert Makin in 1873, the Rev’d John Doubleday in 1881 and 1908 and George Hambrook Dean in 1910 and more recently Rev’d Geoffrey Breed. It hosted the Association Assembly several times up to 1908 and subsequently in 1923 and 1982.

A world at War affects the Church

A nine-week barge strike and a labour dispute during 1890 and a great slump in the brick trade in 1908 caused considerable emigration from the town and from the membership. The considerable death-toll of the 1914-1918 World War also seriously affected the church. The aftermath of the war brought considerable difficulties despite which the membership remained during the 1920’s at a fairly constant 270.

Installing all the Mod Cons

The church was lit by gas until 1926 when electric lighting was installed; the schoolrooms “went electric” later. The coal fired heating system was converted first to oil and then gas.

Depression and Another War

The depression of the early 1930’s and the prevalent concern to preach a “social gospel” persuaded the church, in 1930, in contravention of its Trust Deed, to admit as members, believers who had not been baptised by immersion. Far from adding to the numbers, this ploy seemed to have had the opposite effect, since within six years the membership had fallen to 180. The Trust Deed was implemented in 1979 when the 1930 resolution was rescinded. In 1941 yet another student from Spurgeon’s College, came straight from the college to Sittingbourne as his first pastorate and in the difficult and dangerous days of the Second World War (1939-1945) it must indeed have been a “baptism of fire” for the Rev’d George Cumming who left in 1947 to go to Victoria Drive Baptist Church, Eastbourne, where he remained for over 35 years and became the President of the Baptist Union for the year 1974-75.

A New Baptistery and other renovations

In 1960 a new and open baptistery was built and given to the church by Hedley Owlett Butcher (1904-1979), a faithful deacon for many years.

The pipe organ was removed to have a complete overhaul and some modification by Martin Renshaw at a total cost of £1,760. The organ was reassembled in Canterbury Cathedral for a one-off performance of the Monteverdi vespers, thereafter being re-installed at Sittingbourne Baptist Church on 1 July 1974. (More information about the pipe organ can be found at the National Pipe Organ Register).

Five years later the Minister’s vestry was converted into a toilet suite and in part of the adjacent room a new vestry was constructed, which is at present the church office.

The post-war decades saw five other ministries, ranging in length from three to eight years until Rev’d G Breed which began in 1980 when the membership totalled 179.

In 1981 all the electrical wiring was replaced and a more modern lighting scheme installed. This was followed by major redecoration in 1982.

Greater Use of the Church Building to Serve the Community 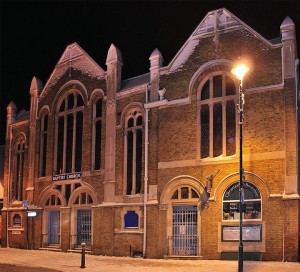 In more recent years the church has greatly expanded its work, if not its buildings or membership. Sittingbourne now has a more transient population leading to a faster turnover of members and also far more movement between denominations than used to be the case. The church too has become more outward looking towards the community and the remaining part of the side hall was converted to form the Christian bookshop in 1996. Following this a Contact centre was established and the Bright Stars pre-school. From being a building only used evenings and Sundays, the church is now used on a daily basis. The role of the minister has expanded as the deacons have taken on more responsibility for spiritual matters and now form a leadership team along with the minister.

Another major change is in the number of paid staff. For the first 130 years only the Minister was employed by the church, our first paid Youth Worker was taken on in 1998 and by 2005 the church had 6 staff working for it in a full or part time capacity.

The front entrance to the building was completely renovated in 2009 when the vestibule was opened up, the large wooden doors removed and modern glass automatic doors were installed. The work started 1st June 2009 it was finished and officially dedicated during a special service 11th October 2009 and by  2010 the full amount had been paid having cost £96,000.

The membership now stands at around 200 and the church is actively involved in the community and a committed member of the Churches Together supporting the “Street Pastors” and other local enterprises.

In 1993 following a decision made at a Church meeting, all the downstairs pews were removed, the floor in the Sanctuary was levelled and the whole area carpeted. The sanctuary was also completely re-decorated at this time and the downstairs was smartened up in 2001 and again in 2016.

In 2005 the pulpit was removed and the platform at the front of the church was extended.

During the ministry of Rev Peter Richmond the music group was formed, and an associated sound system installed. This sound system has gone through a number of updates, culminating with the system we have now (a 24 Channel Eurodesk MX9000), which was installed in 2007.

A new digital projector was also permanently installed at the same time, and is mainly used to project the words to contemporary worship songs and hymns onto a large screen at the front of the church.

In 2012 the ladies toilets were modified to allow a separate ‘accessible toilet’ to be installed.

Since its original build in 1867 the roof has protected all the coming and goings from this building those in mission for the Gospel of the Lord Jesus Christ. It was in desperate need of repair and in the members meeting held  6th February 2013 the members agreed to the complete renewal of the roof at a cost of £143,000. Keeping it in the family, Jonathan Butcher the grandson of Hedley Owlett Butcher (who donated the baptistery) was appointed as the contractor and was completed and dedicated with thanks at a service held 5th October 2014.

To spread the Gospel throughout the town, the church has had four missions

Ministers Of The Church